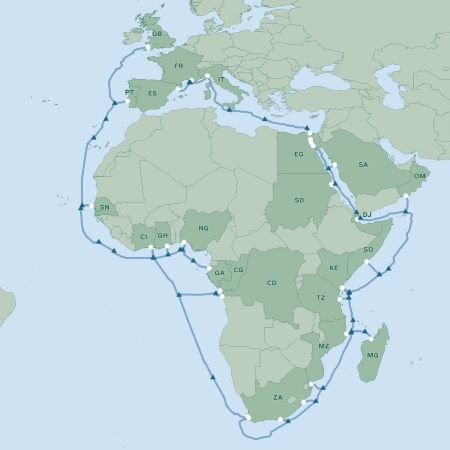 Facebook has announced plans to add four new branches to the pan-African submarine cable system, which is already one of the largest in the world

The enormous 2Africa cable project was first announced last year, set to span roughly 37,000km as it travels from southern France, circumnavigating the African continent, before finally reaching the UK.
At the time, the consortium building the cable, which includes Facebook, China Mobile International, Orange, stc, and Vodafone, said the cable will connect to 23 countries, creating “the most comprehensive subsea cable to serve the African continent and Middle East region”.
Now, the consortium is announcing that the 2Africa cable will actually go even further, adding four additional branches to the Seychelles, the Comoros Islands, Angola and the south-eastern part of Nigeria.
“2Africa will not only be an important element for advancing connectivity infrastructure across the African continent, but it will also be a major investment that comes at a critical time for economic recovery. With more and more people relying on the internet, subsea cables are a vital ingredient to ensure they always are connected to what matters,” said Facebook in a statement. “While Facebook invests in submarine cables to provide better experiences for people using our products, our investments drive a more cost-effective internet for all.”
This is the second addition of new branches to the cable, following Vodafone’s announcement in June that it would be adding a new extension to connect the Canary Islands.
Since the cable’s announcement last year, most of the subsea route survey activity related to the project has been completed. Alcatel Submarine Networks, who have been hired to build and deploy the cable, have begun the manufacturing process, with initial deployments scheduled for 2022.
The 2Africa cable expected to be completed by late 2023.
As it stands, the cable will have 35 landings in 26 countries, but yet more expansions could still be agreed.
How will the 2Africa cable affect connectivity across the African continent? Find out from the experts at this year’s Submarine Networks EMEA conference
Also in the news:
Syniverse SPAC merger will see firm go public
T-Mobile latest telco to suffer mammoth data breach
BT’s Equinox pricing – a gift or a curse for UK broadband?
Share

Vodafone Germany aims to cover 30m people with 5G in 2021