Global 100: Putting the world to rights

Total Telecom’s ranking of the top 100 operators returns, with forex causing changes at the top and ambitious players elbowing their way up the table.

Total Telecom’s Global 100 report on the world’s biggest operators by revenue returns today with a teaser of the 2016 ranking.

There is a notable change towards the top of the table, with Japan’s NTT overtaking China Mobile to take third spot – the former benefiting from the strong appreciation of the yen during the reporting period.

NTT wasn’t the only major player to feel the effects of foreign exchange movements.

Even before 2016’s Brexit referendum, sterling was struggling against the euro and the dollar, and this is plain to see in Vodafone’s numbers. The U.K.-based telco held onto seventh place in the 2016 Global 100, generating revenue of £40.97 billion/€47.86 billion. A year earlier though, Vodafone’s revenue came in at £42.23 billion/€57.72 billion. With turbulence in India since then, it is not clear where Vodafone will rank in the 2017 Global 100.

As can be seen in the table, Europe’s major operator groups held steady in 2016. Telekom Austria parent America Movil slipped one place to 10th; it now sits behind China Telecom, which grew its revenues in euro terms to €44.97 billion from €43.37 billion, while America Movil’s fell to €44.80 billion from €47.25 billion.

Forex is the culprit again here, with Mexico-based America Movil’s revenues in pesos up significantly year-on-year to MXN894.22 billion from MXN848.26 billion. 2015 saw the peso reach new all-time lows against the dollar.

AT&T consolidated its position at the summit, as the integration of DirecTV and its expanding operations in Mexico drove revenues to €137.44 billion from €108.95 billion a year earlier.

Second-placed Verizon maintained the pressure. Strong wireless and video net additions helped to boost its revenues to €123.21 billion from €104.54 billion.

AT&T and Verizon have been in the top two for a number of years now. What is interesting about the 2016 Global 100 is the rise of some of the lower-ranked U.S. players.

CenturyLink elbowed its way up to 18th from 20th, as the telco, which started life as a rural operator, placed more emphasis on the enterprise side of the business. Since the 2016 Global 100 was collated, CenturyLink has struck a $34 billion merger with Level 3, so it will be interesting to see where it ranks in 2017’s Global 100.

Meanwhile, Comcast has risen to 20th from 23rd, with revenues up to €14.98 billion from €12.33 billion. In 2015, it placed much greater emphasis on customer experience; it paid off, with the cableco adding 666,000 customer relationships during the year. 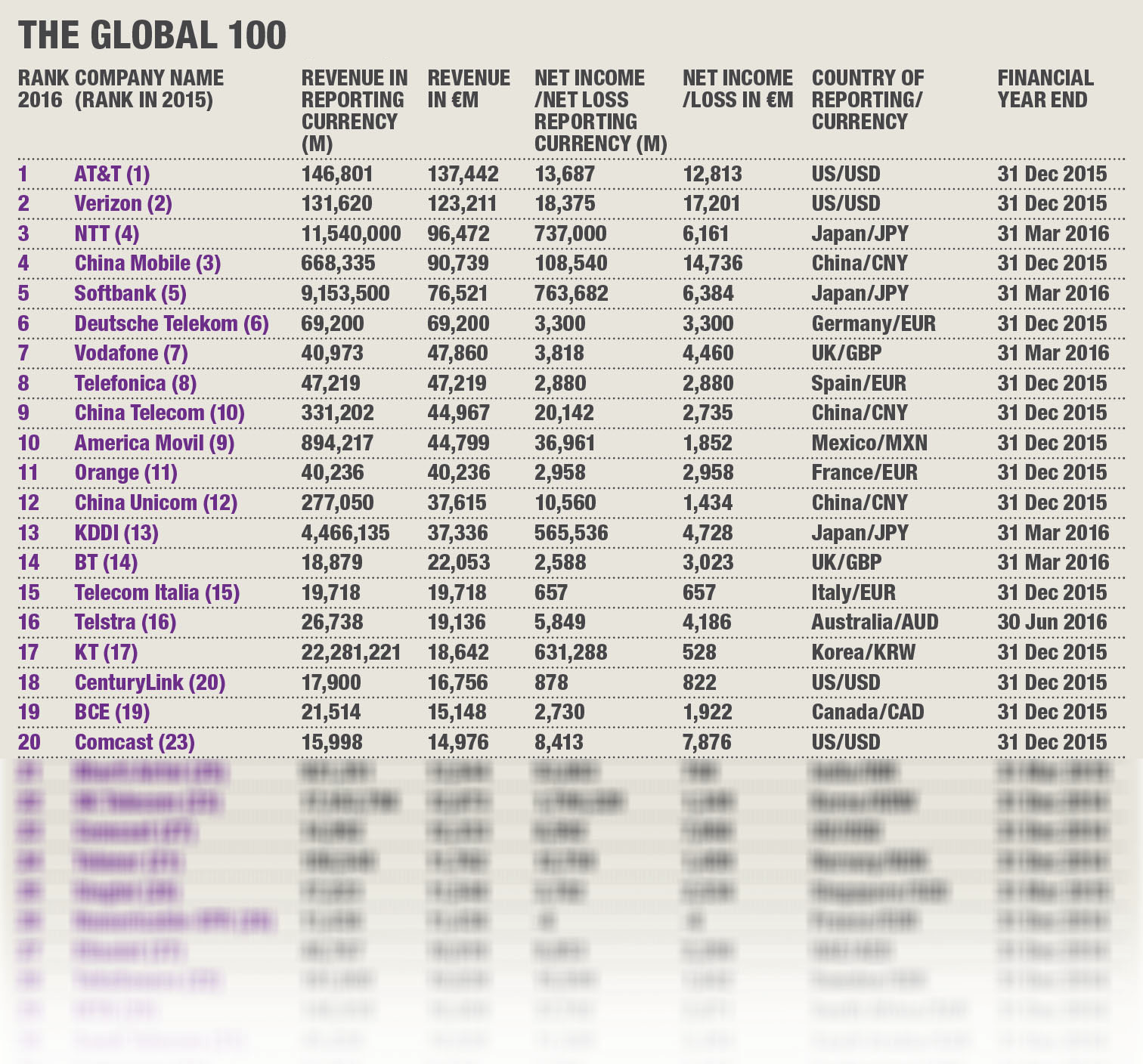 This is just a taste of what’s to come. The full Global 100, complete with in-depth commentary, methodology, and the 2016/2017 rankings, is due out later this year.