The latest update to the 5G-aliser, made in collaboration with STL Partners, shows a number of key drivers maintain their momentum from our last update, including interest in Open RAN and private networks.

The biggest positive change is that the number of standalone (SA) 5G deployments are growing steadily, potentially unlocking some of 5G’s more advanced capabilities, such as network slicing. This is all facilitated, at least in part, by the additional spectrum that is becoming available around the world. From smaller nations like Chile giving operators 5G spectrum for the first time, to the US auctioning C-band spectrum for a premium, 5G spectrum is becoming more widely available.

However, the development of 5G over the past few months has not been without its challenges. The pandemic continues to rage on, as vaccination programmes around the world clash with a potential new variant of the disease. Meanwhile, US–China tensions have not eased under US new president Joe Biden, playing a major role in 5G discussions around the world.

Finally, though not directly related to 5G, the ongoing semiconductor supply crisis is reaching a crescendo. While smartphone manufacturers appear to have been given priority by the chipmakers, at least for now, it is unclear how these shortages will affect the telecoms industry at large and potentially disrupt 5G deployments and strategies.

Let’s take a look at some of these drivers in more detail. 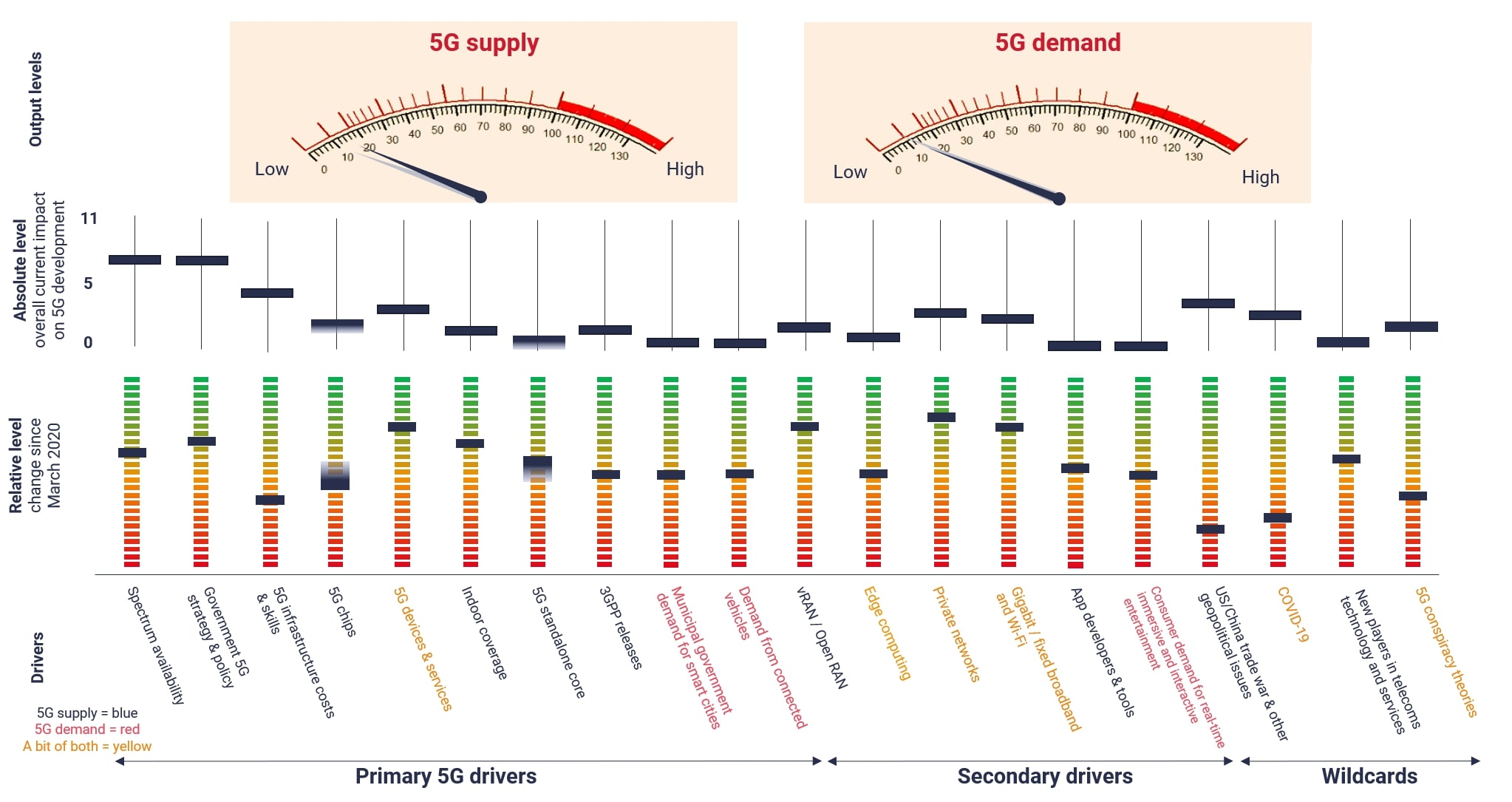 Could the semiconductor crisis impact 5G?

At the start of the coronavirus pandemic, a sudden drop in demand for various connected devices, especially automobiles, coupled with lockdown restrictions, saw various semiconductor foundries temporarily close their doors. However, with much of the world confined to their home, device demand soon soared, eclipsing previous levels. Unfortunately, the semiconductor industry is intrinsically slow-moving, with chipmakers struggling to meet the surging demand, creating a shortage that has seen prices skyrocket and delays set to last for many months.

To what extent this crisis will affect 5G remains to be seen. Demand for 5G handsets is increasing, with research firm IDC forecasting that revenue from chips powering mobile phones will grow by 23.3% to reach $147 billion in 2021.

"2021 will be an especially important year for semiconductor vendors as 5G phones capture 34% of all mobile phone shipments while semiconductors for 5G phones will capture nearly two-thirds of the revenue in the segment," said Phil Solis, research director for connectivity and smartphone semiconductors at IDC.

For now, the buying might of smartphone companies like Apple has seen their products pushed to the front of the queue, while industries like automotive, which use less advanced (and therefore less profitable) chips, will be forced to bear the brunt of the shortage. Nonetheless, the shortage will still have major consequences for big players in the 5G telecoms space, especially via the likes of Qualcomm.

Another interesting side effect here is, much like 5G itself, the increasing politicisation of the semiconductor industry. The shortage has exposed the global nature of the chip industry, with counties like Europe and the US finding themselves overly reliant on the production capacity of other nations, especially China and Taiwan. As a result, various countries are hurrying to develop their domestic markets. The Chinese government is pushing for major domestic investment, with onlookers suggesting that self-sufficiency could be achievable in the next two years. South Korea recently announced that it would see $450 billion invested into the industry by 2030. Meanwhile, in the West, European Commissioner Thierry Breton recent met with executives from Intel and Taiwan Semiconductor Manufacturing Company (TSMC) to try and encourage them to build foundries within the EU.

The semiconductor landscape is changing and the implications for 5G in the coming years could be significant.

In Germany, O2 is aiming to launch standalone 5G in the summer of this year. In Switzerland, Ericsson has recently signed a SA5G deal with Swisscom, meanwhile Singtel is already rolling out the technology in Singapore.

In the US, T-Mobile continues to drive SA deployment, mandated primarily as a result of its limited 4G spectrum.

Nonetheless, China still likely the world leader in standalone, with operators expected to deploy around one million base stations this year.

We expect more SA5G deployments announcements in the coming months. 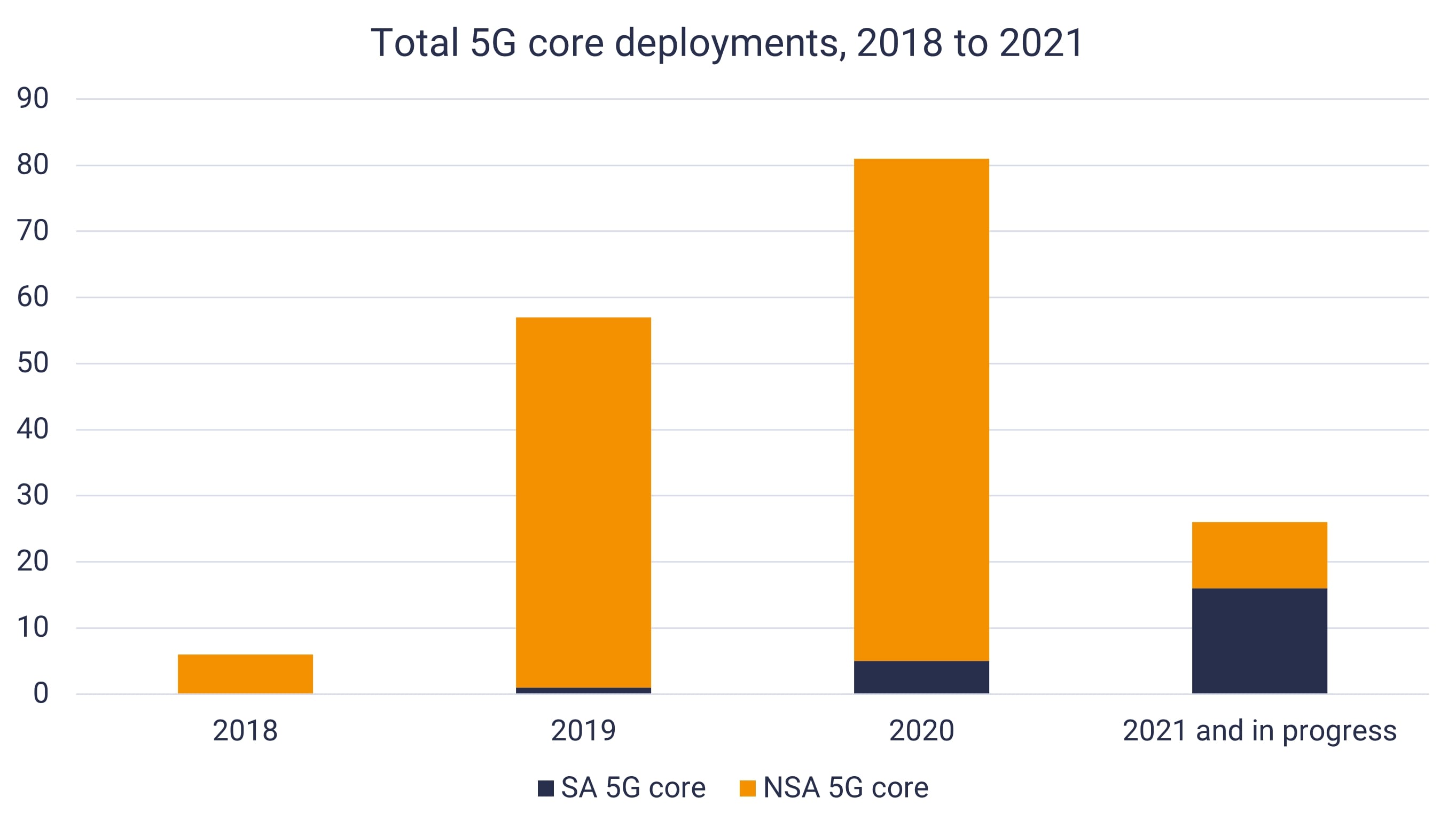 Back in January, five of the Europe’s largest operators, Telefonica, TIM, Vodafone, Deutsche Telekom, and Orange, signed an MoU to collaborate on the development of Open RAN technology, and since then interest continues to grow. Since the signing of the MoU, TIM has notably begun deploying Open RAN on its live network, while Vodafone UK is already set to replace a portion of its outgoing Huawei equipment with the disaggregated technology.

The UK appears to be particularly exciting prospect for Open RAN; following the government’s diversification taskforce suggesting in April that 25% of the nation’s 5G infrastructure should come from smaller suppliers, both Vodafone and Mavenir have announced the launch of Open RAN-focussed labs in the UK.

But the interest Open RAN is not confined to Europe, seeing uptake and development in various markets around the world. Indosat Ooredoo, for example, is trialling tech in Indonesia, while Millicom is deploying Open RAN with Parallel Wireless in Colombia.

While doubts remain about this technology’s ability to compete with traditional RAN, especially for 5G, the industry’s appetite for Open RAN right now cannot be questioned.

At the heart of 5G development is the availability of suitable spectrum and now, with pandemic delays mostly overcome, auctions are once again in full flow.

Last month saw the UK 5G auction conclude with O2 and Vodafone agreeing to trade spectrum to give both of them more contiguous blocks. Around the same time, Denmark was also auctioning more spectrum in various bands between1.5 GHz and 26 GHz, while Australia was auctioning mmWave for the first time.

India recently took part in a major 4G auction, having postponed a 5G to an unspecified time later this year. However, the high reserve prices and conditions for the auction have seen the country’s telos butt heads with the regulator, meaning we could see this auction delayed until 2021. The regulator recently allowed 5G trials to go ahead, but restricted operators from working with Huawei and ZTE.

All of these developments were somewhat eclipsed, however, by the US mid-band 5G auction which raised an enormous $81.11 billion. If we needed any reminder of just how vital 5G spectrum is to carriers right now, this auction was the perfect demonstration.

Around the world, industries are becoming increasingly aware not only of the value of 5G, but about the additional benefits that can come through private deployments. The last few months have seen numerous deployments in various markets, typically focussed on manufacturing, but also mining and ports.

Telefonica announced a deal with Microsoft Azure for Private Edge Zone computing platform, hoping to bring the concept of smart factories closer within reach. Nokia is deploying a private 5G network with Russian palladium and nickel mining company Nornickel, as well as for a smaller factory in its native Finland. Verizon Business is extending its reach beyond the US, announcing the deployment of a private 5G network for the Port of Southampton in the UK. Meanwhile, Ericsson is deploying a private network for Airbus in France, for now being limited to LTE but aiming to test mmWave capabilities over the next year.

But perhaps one of the most interesting developments in this space is the growing potential for manufactures to potentially build their own 5G networks without relying on telco vendors. Foxconn and Siemens, for example, for example, are both exploring the development of their own 5G technology for deployment in their factories. If such deployments prove successful, telcos could soon face novel competition.

While global challenges such as the pandemic and the semiconductor shortage lead to a somewhat volatile environment for the development of 5G, the industry nonetheless remains broadly positive. The technology is slowly maturing, new use cases are becoming available, and 5G innovation is flourishing. But, despite progress, widespread uptake of the new technology has still got a long way to go.

For the 5G-aliser’s May update, this all translates to a gradual increase of the 5G supply metric, while we are witnessing no great change in demand.

Want to know more about 5G and the way it can impact vertical industries? Total Telecom’s 5GLIVE is taking place right now! It’s totally free to attend, so please register now to join the discussion 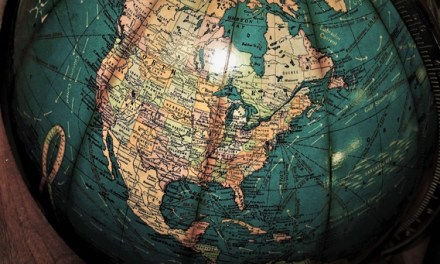 Friday Review: Back(haul) to the future