Consumers know what they want but not what they need

In 25 years, the Total Telecom editorial team has learned that without a decent network, your AI-powered robot is just a creepy doll

We have all heard the old adage that consumers care more about the devices and applications they use than the underlying access. That still holds true, to an extent, which could be a problem for telcos, who are depending upon Joe Public to recognise the need for – and be willing to pay for – their particular flavour of high-speed network access.

This week saw the publication of another survey in which respondents voted the smartphone as the most important technological development of the past 25 years. In the study, carried out by U.K. business services provider TSI, 60% of respondents named the smartphone as having had the biggest impact over the last two and a half decades, compared with 30% who described the arrival of dial-up Internet as the biggest technological breakthrough of the period. Perhaps I’m overthinking it, but I can’t help but wonder what many of those people imagine they would do with their iPhones without access to the Internet… 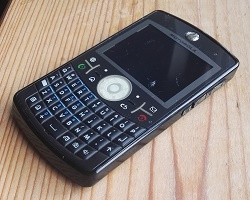 Then again, maybe I’m not the right person to ask.

I acquired my first smartphone on a visit to Microsoft HQ in 2008 and I have to admit I’m still using it, despite the fact there are a couple of buttons missing. The battery life is excellent, but that might be because it doesn’t do much!

25 years ago, innovations such as the fax machine, the floppy disc and the pager were all the rage, but for the most part they have now fallen by the wayside, the TSI study notes. Indeed, it is 15 years since I joined Total Telecom (although as an aside, my right-hand man Nick Wood and I have served 25 years between us!) and I can still remember the excitement when our old CRT monitors were replaced with flat screens, yet today it is hard to imagine what our desks actually looked like with all that hardware on them.

Over the next 25 years, robots, artificial intelligence and driverless cars will become commonplace, according to TSI’s survey respondents, but underwater cities will not. You heard it here first.

But whatever new technological innovations find their way into our lives, they won’t be much use without the networks that underpin them.

TIM CEO Amos Genish this week talked up the importance of high-speed networks as we move towards what he described as the third wave of the Internet, which will see the rise of services powered by the aforementioned artificial intelligence, virtual/augmented reality, and robotics.

"This, combined with 1 trillion sensors by 2025 will enable seamless interactions between people, objects and the environment," Genish said, in a presentation at the Italian operator’s Open Lab in Turin. To enable this digital transformation, "Giga networks are needed that, beyond bandwidth and coverage, offer adequate speeds for real-time applications, high reliability and security to allow the quality of experience needed in a digital world," he said.

Another European incumbent is once again testing demand for fibre-to-the-home (FTTH) in remote areas, having discovered there was no real appetite for full fibre a few years ago.

Deutsche Telekom this week announced plans to deploy FTTH to residents of the town of Bad Staffelstein in eastern Germany, provided enough people sign up for the service during a three-month registration period this winter. It will roll out FTTH in the area if it gets 750 registrations from a town of just over 10,000 people.

BT also detailed a small step towards increasing the availability FTTH, disclosing a partnership deal between its Openreach unit and housebuilder Redrow Homes to co-fund the deployment of FTTH to 3,000 U.K. premises.

The deal covers recently-built properties that were not within the scope of any commercial or government-backed fibre project when they were first planned. The telco said it is open to replicating the model with other developers.

National governments are also getting in on the act when it comes to pushing advanced network rollout, and this week it was the turn of the U.K. administration to show just how clued up it is by crowbarring fibre, 5G and artificial intelligence into the chancellor’s autumn budget statement.

The government pledged an additional £500 million to boost the country’s broadband connectivity. Funnily enough, its announcement was light on detail; apparently around £385 million of the funds will be ploughed into 5G and FTTH infrastructure.

Nonetheless, the announcement shows that there is some awareness from outside the industry that life-enhancing technologies – iPhones, robots, self-organising fridges et al – do need serious network connectivity; without it, you are left with shiny objects for your kids to flush down the toilet, creepy dolls, and a box for keeping your milk cold. Useful, perhaps, but hardly ground-breaking.

Without connectivity, this week’s Friday Review would be confined to my computer, read by noone but myself. If you think that would be a good thing, now is not the time to write in and tell me…

As TSI’s survey pointed out, "advancements in technology allow us to work more remotely and spend less time travelling." The firm claims that 58% of the working population spends seven hours or more per week travelling for business, including the daily commute, which amounts to 15 days per year. Meanwhile, 4 million people in the U.K. work from home.

50% of those surveyed chose Bora Bora in French Polynesia as their ideal location for remote working. This Friday Review was brought to you from beside the sea…but in a slightly less exotic location!