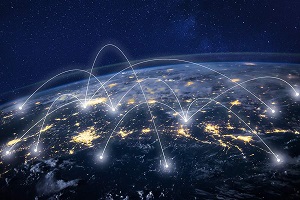 With the rapid development of 5G, cloud, and automation technologies, the next ten years will be the golden decade of the intelligent era. In this exciting era, where everything will be connected, the industry will see five major changes.

"First, there will be more connected objects, including people, families, massive IoT smart devices, and intelligent twins. Secondly, 5G, WiFi 6, and fiber access technologies will enable breakthroughs in service capabilities and provide ubiquitous Gigabit. Thirdly, connections are now more diverse, so the use of the home broadband network has extended from information and entertainment to education and others," said Lu Haiou, President of Huawei NCE Product Dept, while speaking at the Huawei Better World Summit 2020.

The Role of Automation
According to Gartner’s report on Top 10 Strategic Technology Trends, hyper-automation will be an irreversible and inevitable trend.
"With autonomous and scenario-based decision making, automation enables fault self-healing, transforming network maintenance, from passive response to proactive governance. Therefore, we firmly believe that telecom networks should fully utilize automation and Big Data to improve network automation," Lu said.
Huawei uses a three-layered automated architecture to introduce automation into NEs, networks, and clouds systematically. Huawei’s 30 years of expertise in the communications field has resulted in the development of four network automated algorithms, including resource prediction algorithms, network KPI detection algorithms, fault indicator algorithms, and root cause confirmation algorithms.
"NCE uses massive data in automated algorithms to drive real-time network awareness, analysis, and diagnosis, enabling closed-loop autonomy of FBB networks. iMaster NCE can be used in various scenarios such as network planning, deployment, service provisioning, network maintenance, and network optimization, accelerating full lifecycle network automation," Lu explained.
Typical Scenarios of Troubleshooting 0-1-3-5
The ultimate goal of an autonomous driving network is to achieve network self-healing. Network self-healing relies on the accurate forecast, real-time awareness, and fast diagnosis and rectification of network faults.
Combining NCE with NAIE and AUTIN forms the "Troubleshooting 0-1-3-5" solution, which takes 1 minute to carry out fault awareness, 3 minutes to diagnose the fault, 5 minutes to rectify the fault, and predicts a fault in advance.
As one of the typical scenarios, NCE can predict network anomalies in advance based on potential risks such as fibre deterioration and eliminate them before they start to impact. Sharing the case of fibre deterioration and prevention, Lu highlighted challenges in ascertaining the optical fibre cable’s health that can have massive ramifications for the operators.
"There are two types of fibre problems—One is fiber cuts, which are caused by uncontrollable factors such as construction or natural disasters, while the other is performance faults caused by fiber deterioration. To achieve a high-precision fiber health forecast, masses of data and a complete range of deterioration characteristics are critical," Lu said.
Fibre deterioration is greatly impacted by environmental factors such as temperature and humidity. Just one fibre cut can impact up to 200,000 mobile users and 5,000 broadband users. With automation, Huawei is able to check the daily, weekly, and monthly health of the fibre. The forecast accuracy has increased to 90%. It is estimated that the iMaster NCE solution can help customers reduce 30% of fibre-caused faults.
Sharing another case from a telecom carrier, Lu showcased how the iMaster NCE solution offered real-time awareness, improving troubleshooting efficiency by 30% through proactive identification of IP network exceptions. The fault demarcation time was reduced to minutes from several hours previously.
Giving another example, he talked about how intelligent recovery can help in automatically optimizing home WiFi in the cloud, reducing average door-to-door visits by 10%.
"According to statistics, home network traffic has increased by 70% in the past ten months. The complaints about home broadband have also increased. About 60% of the complaints are about home networks, and most of them are about WiFi. Most of these faults require home visits and primarily occur due to interference, roaming or configuration issues or device or connection issues. Door-to-door visits have always been costly," Lu said.
He pointed out that in developed markets such as Europe, a single door-to-door visit can cost anywhere between $60 and $80. "To reduce unnecessary home visits, we use NCE cloud optimization solution to automatically recover from interference, roaming, and configuration issues," Lu said. This solution can not only reduce door-to-door visits by 10% but can also bring down user complaint rates by 10% and improve O&M efficiency by 15%.
NCE Commercial Use Progress
iMaster NCE is Huawei’s intelligent management and control unit for FBB autonomous driving networks. It is the industry’s first integrated management, control, and analysis system. NCE Manager, Controller, and Analyzer can be flexibly deployed as needed, and full lifecycle use cases can be loaded on demand.
More than 1,800 sets of iMaster NCE have been deployed globally, including about 300 sets of one-stop deployment of management, control, and analysis. Enhancing the network’s intelligence and analysis capability is critical for service providers to leverage the vast potential of the intelligent era.
Share

BT set to close 270 offices across the UK