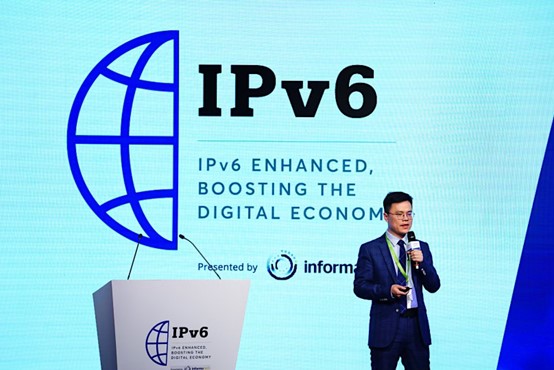 At the summit, Ping Wu, CTO of Huawei Datacom Product Line European Branch, delivered a keynote speech titled "IPv6 Enhanced, Unleashing Connectivity Potential", in which he shed light on the pivotal role played by IP networks in digital development. He highlighted that the evolution from IPv4 to IPv6 for address space expansion is only the first step. It is also vital to introduce IPv6 Enhanced for improved deterministic quality, programmability, and maintainability of connections, thereby meeting the requirements of various industry scenarios, unlocking the full value of connectivity, and promoting the steady development of the digital economy.

Digitization is sweeping across the world. In most countries and regions, the growth rate of the digital economy is more than twice that of overall GDP, and the digital economy now has a greater impact on the world than at any other time in history. In recent years, many countries and regions have released their national strategies for digital economy development. For instance, the Digital China strategy put in place by China aims to accelerate the construction of a digital society, improve the level of digital public services, and build a robust digital ecosystem. Such strategies require an IP network that connects to all things at one end and a myriad of applications at the other.

The rapid development of the digital economy poses new requirements on traditional IP networks. For example, there will likely be tens of billions of IoT devices by 2030, making mass connectivity a fundamental capability required of IP networks. And with the advent of the cloud era, more and more enterprises adopt multi-cloud connectivity for critical service backup and various applications, placing higher demands on network flexibility and real-time performance. In the future, not only will office services be moved to the cloud, but so too will production services. This will require much higher deterministic network quality. For example, in scenarios such as industrial control and telemedicine, the E2E network latency and jitter must be kept within microseconds.

To address the preceding challenges, Ping Wu said the first step is to use IPv6 technologies to meet the requirements for huge volumes of IP addresses. On this, the industry has already reached a consensus. But this alone is not enough. Further optimizing connectivity will require innovative IPv6 Enhanced technologies for better deterministic quality, programmability, and maintainability. Only in doing so can we fundamentally meet the requirements of the digital economy and unlock the value of connectivity in the digital transformation of various industries.

For example, the IPv6 Enhanced-based intelligent cloud-network solution helps operators build differentiated cloud access private lines based on their own network advantages, providing users with fast and smooth cloud access. On the access side, the one-box multi-connection solution helps users quickly access clouds. On the aggregation side, the pan-private line scheduling solution enables unified access and smooth evolution. On the backbone side, the SRv6-based intelligent cloud-map algorithm enables optimal scheduling of cloud-network resources.

From human-to-human connectivity to connectivity of everything, IPv6 Enhanced has been put into commercial use at more than 100 sites around the world, effectively supporting the digital development of various industries such as finance, manufacturing, energy, education, and healthcare. Now is the time to embrace IPv6 and IPv6 Enhanced technologies to unleash connectivity potential and accelerate the advent of the digital world.

JT awarded for commitment to innovation

US to investigate Amazon, Apple, Google and Facebook over anti-trust concerns