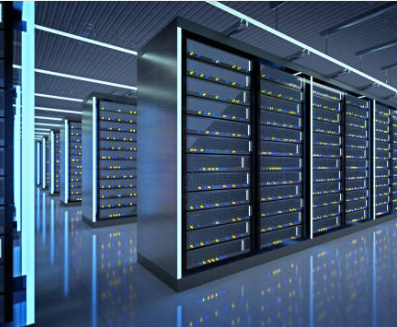 The vision that caused the leap from localised electricity service platforms to national critical infrastructure has happened in the world of content and eyeballs. There’s a recognition of the critical importance to an economy of having a robust data centre and telecommunications infrastructure to protect Gross Domestic Product (GDP).

This is more and more in evidence in the subsea and data centre (DC) industry. In the analogy above, replace electricity with content and end-users (consumers) with eyeballs. Now recognise that content is global and the new power stations of content, the data centres and the subsea telecommunications systems enable its exchange, unlimited by national boundaries.

As with any competitive industry, there is in the subsea and data centre industries an energy to improve efficiency and economy. The move to locate the cable landing station (CLS) in the data centre is evidence of this. Efficiency is achieved in the direct collocation of content adjacent to the CLS, optimising access and throughput rates at the data centre into the market where the CLS resides, and to the markets the subsea system connects to. The market footprint of the data centre is now defined by latency not geography. Stellium Datacenters market spans from east coast USA (66ms latency), within UK (<8ms latency), northern Europe (<19ms latency) and the Nordics (<10ms latency).

The development of the UK subsea connectivity landscape has seen several pivots from its origins of Cornwall to London, to the South East Coast through Blackpool, to Manchester to London and the South East Coast to the latest most significant pivot of Blackpool to Newcastle-Upon-Tyne and the North East of England. This new route, through the CLSs located at Stellium’s data centre, connecting UK Inc. to the Nordics and Northern Europe introduces the highest capacity subsea cables and critically an alternative route into and out of the UK, with a significant chub and the capability to host 120MWs of content. 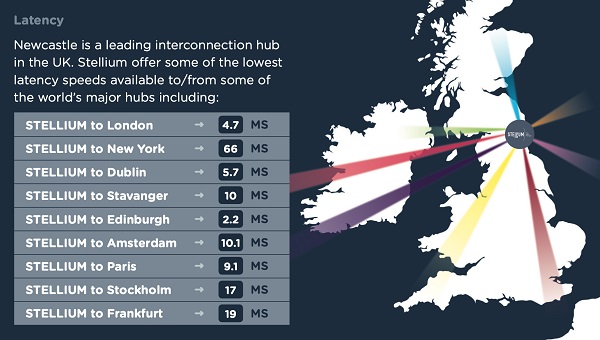 Efficiency comes from the direct access to content whether that be OTT, gaming, fintech or streaming, all of which are latency sensitive. The coalescing of carriers and eyeball networks around the CLS enable the creation of a virtual carrier and Internet Exchange marketplace where connectivity can be traded, driving down cost and improving margins.

Stellium stood up and founded and operate the NCL-IX (Newcastle Internet Exchange). It is at its core an Internet Exchange Point (IXP) but Stellium is also something more than a traditional IXP – Stellium is a DC AND IXP, a CONTENT AND CONNECTIVITY HUB where the new vision of our world is realised.

Optimisation comes when the CLS is collocated in a Tier III data centre rather than in a containerised environment on a remote coastal site. Inherent in this is the significant reduction of risk  to power outages and security breaches and the operationalising of cost, as the backup infrastructure costs are ‘as-a-service’ in the data centre.

In the video below, Gerry Murray, Stellium/NCL-IX’s Chief Commercial Officer, spoke to Sub Net about a number of key issues in the converged world of the data centre, subsea, CLS and IXP.

Stellium Datacentres own and operate the largest purpose-built carrier-neutral data center campus in the UK and is the home of the UKs newest Internet Exchange NCL-IX.

Stelliums Tier 3+ data centre campus has a guaranteed availability of at least 99.982%. It is ISO-27001 Information Security, ISO-14001 Environmental, ISO-9001 Quality, ISO-20000 IT Service and ISO-22301 Business Continuity Management Certified along with PSN Network and Cyber Essentials+ certification and has direct access to sustainable green power of up to 80MW.

Stellium offers the highest quality connectivity to local, national, and global fibre networks, for low-latency, high-capacity open network connection and is where clocation, subsea and terrestrial communications converge. In addition to being the UK’s only data centre hosting the cable landing station for the new NO-UK cable from the Nordics, Stellium’s data centre is also the UK hub for data transmitted between the United States, the UK and Europe on the North Atlantic Loop, a new transatlantic subsea fibre network provided by Aquacomms.

How has COVID-19 impacted the digital transformation agenda?

Hyperoptic hits the streets as it expands network