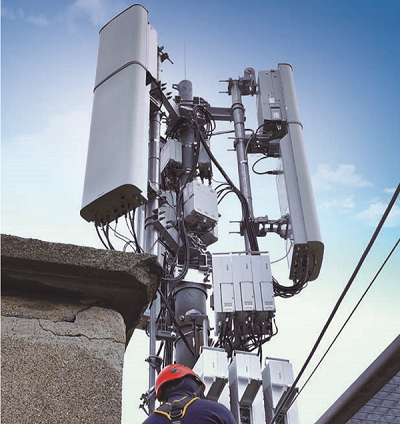 Take, for example, the case of LG Uplus, a prominent service provider in South Korea. Their M-MIMO deployment helped the service provider deliver the best speeds in South Korea’s 5G market, reaching a mediuan download speed of 522.28 Mbps and median upload speed of 53.81 Mbps, according to data from the Global 5G Benchmark Report by Ookla. The latest report by RootMetrics by IHS Markit, also shows that LG Uplus has maintained its leadership position for the third consecutive year.

Furthermore, the telco is also making the most efficient use of the available spectrum, since it is able to offer better speeds and network experience despite only having 80MHz of 5G spectrum. Its competitors, KT and SK Telecom, have 100MHz each.

As 5G network coverage increases globally, providing a superior user experience will be critical for service providers, and M-MIMO is emerging as the technology of choice to help achieve this. The massive number of antennas in M-MIMO enables beamforming to focus the wireless signal in a specific direction. This helps in enhancing data rates and capacity for all users. It also helps to improve network coverage while providing a consistent experience across the network, including the cell edge. Thus, it can be said that M-MIMO is the foundation of a 5G network to provide a good user experience.

LG Uplus is not the only service provider to have gained from deploying M-MIMO. For example, DNA, a Finnish service provider, has converted the majority of its 5G sites to implement M-MIMO technolog, helping it to deliver speeds of 1.6Gbps. This has helped the telco emerge as the fastest service provider in Finland for Q1-Q2 of 2021. The recent Global 5G Benchmark Report says the service provider achieved the highest median 5G download speed in comparison with its rivals, Telia and Elisa, the two top telcos of the country.

The extensive use of M-MIMO deployment by these telcos demonstrates that the technology can help telcos provide a truly differentiated 5G network experience, which will be critical to boosting revenue, preventing churn, and ensuring the best-in-class customer experience.

This growth is on the back of an extraordinary increase in the number of subscribers. The service provider has recorded a massive increase of 108.8% year-on-year to 3.727 million subscribers. On the other hand, the number of LG Uplus’ MVNO subscribers has gone up by 79.4% to 2.357 million, recording the biggest increase in its wireless business. It recorded 1.55 trillion KWR revenue growth, a 5.7% YoY increase. With the upcoming launch of new 5G devices, LG Uplus expects its 5G subscriber base to continue to expand this year.

South Korea was one of the first countries to launch 5G, and it has been able to maintain momentum because of M-MIMO technology. The regions just starting their 5G journey need to include M-MIMO in their network strategy to scale faster and deliver a world-class 5G network experience to their subscribers. For instance, Thailand’s AIS’ 5G network covers almost 25% of the country’s population now. It has also recorded over 1 million 5G subscribers in 2Q 2021, which resulted in 12-18% ARPU uplift and enabled Bangkok to become one of the world’s top 10 cities with regards to 5G speeds. The use of M-MIMO will help it to quickly scale its 5G network without impacting the quality of services.

The successes of LG Uplus, DNA, and AIS highlight the crucial role of M-MIMO in supporting the service providers in quicker monetisation of 5G investment and in delivering a superior customer experience. As the pace of 5G deployment quickens, the service providers need to deploy it on a large scale to provide a differentiated experience and grow revenue.