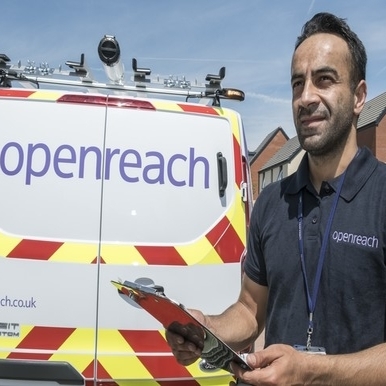 The UK’s incumbent broadband network provider, Openreach, has confirmed that 1.2 million premises in the country are now able to access its fibre to the home (FTTH) services.

A year after launching its Fibre First policy in the UK, Openreach reports that it is "on course" to deliver its target of 3 million FTTH connections by the end of 2020.

“Our full fibre build is speeding ahead and we’re now ready to connect more than a million consumers and businesses if they decide to order from a service provider that’s using our FTTP network," said Clive Selley, chief executive of Openreach.

“Since the launch of our build programme last year we’ve made huge progress – honing our skills, tools and techniques, driving our costs down and helping our engineers to go ever further, faster and more efficiently. Last month we announced plans for Salisbury to become the first entire city in the country to have access to our FTTP network – in what is expected to be the fastest city-wide network build in the UK.

“But it’s not all about being a fast builder, we’re also keen to encourage fast adoption. We recently launched a consultation with industry to decide how and when we upgrade customers to this new future-proofed digital network.

“Ultimately our ambition is to deliver the best possible digital connectivity to everyone, everywhere, across the entire country. I believe the progress we have made to date proves that we’re making good on that promise, but there’s more to do," he added.

The announcement was greeted with enthusiasm by the UK’s digital minister, Margot James, who said that the country was on track to deliver on its commitment to the digitalisation of its economy.

"The Future Telecoms Infrastructure Review set out our approach to maximising full fibre coverage, and I’m delighted that Openreach has now reached one million homes and businesses. Significant investment like this from network operators is critical to deliver our plans for nationwide coverage, and we’re working with industry and Ofcom to create an environment that supports and encourages the commercial rollout of full fibre broadband," she said.

After passing the 1.2 million property milestone, Openreach announced that it will be adding a further 12 cities to its Fibre First initiative, bringing the total number of locations in phase one to 28.

Openreach says that it has ambitions to provide up to 10 million FTTH connections by the mid-2020s.

Clive Selley will be discussing the progress of Openreach’s Fibre First programme at this year’s connected BritainEvent. Held from the 18-19th June 2019, Connected Britain will bring together the key stakeholders in the UK’s fixed line and mobile connectivity space. Click here to find out how you can be involved in the show.

IT weaknesses – the barrier to enterprises becoming security-first