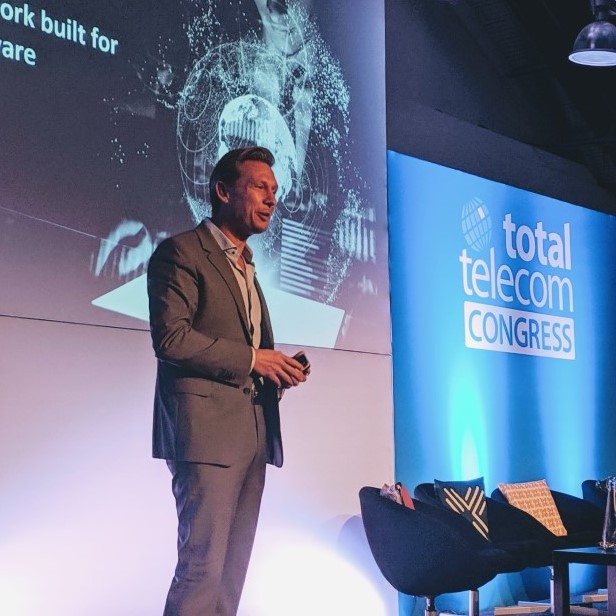 Operators should no longer be building networks for smartphones, the Senior Vice President Internet of Things (IoT) at Sprint said today.

Speaking during a keynote at Total Telecom Congress, Ivo Rook told the packed auditorium that telcos should instead be designing and creating infrastructures specifically for the IoT and software era.

This, he said, will not only ensure operators are prepared to handle new technologies such as Artificial Intelligence (AI), robotics and autonomous objects, but will also address declining revenues, with IoT offering ‘50% more profitability.’

“If we believe the world is about to change and networks are in the middle of that, maybe we should rethink not just how we are building network but also why we are building networks,” he said. “[…] The hard economic truth, if you are an operator, is it is a cut-throat replacement market and we are pouring money into a market that is hardly every growing. […] And if you look at that, where can you go as an operator? There are only two places; you either go into video and content or you go into IoT. IoT has got eight times the growth and at least 50% more profitability so there is a huge economic incentive to go there.”

According to Rook, when entering the IoT market, operators have the choice of using spare capacity and managing IoT on their existing network or creating a new network designed and built specifically for IoT use cases, as Sprint has done with its Curiosity Network. This network is built entirely on software which Rook said means third-party software can easily be added.

While Rook said that the first option was not necessarily wrong, he declared the latter option to be much more beneficial due to the likelihood that IoT data growth will actually be much greater than currently forecasts predict.

“If you don’t do it because of cash, do it because reality is staring us in the face,” he said. “IoT analysts are predicting the future using the paradigms of today and that means IoT growth is going to be even bigger than expected.”

Rook illustrated this point by referring to smartphone data volume growth which greatly exceeded expectations due to the launch of YouTube, Netflix and smartphones. The killer apps for IoT that will result in similarly exceeded predictions, said Rook, will be video and AI.

“What is about to happen in IoT, is that AI and video will take off,” he concluded. “And the moment you start to introduce video sensing, combined with AI, the amount of things that can be seen and sensed is unlimited so video is going to hit IoT at some point in big way and then same thing will happen again. Eventually, the IoT network will require more data, more capacity than the smartphone network.”