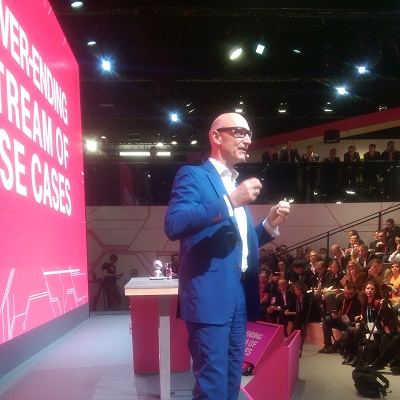 Deutsche Telekom CEO Tim Höttges on Monday predicted that the smartphone will be superseded by new form factors that make accessing information and communicating more intuitive.

He made his prediction as he revealed that the German incumbent is collaborating with optics specialist Carl Zeiss on augmented reality glasses.

Höttges modelled a concept version of them during a press conference at Mobile World Congress. They are designed to stream information from a smartphone and display it on the lenses. Future versions will connect to mobile networks and stream information directly from the cloud, rather than rely on a smartphone as an intermediary, Höttges predicted.

"I believe these glasses will replace the smartphone," he said.

"It is a totally new optical concept," claimed Ulrich Simon, head of research and technology at Carl Zeiss.

During a Q&A session, Höttges suggested that consumers are growing weary of the same old candy-bar smartphone design.

It is questionable whether AR glasses will be the form factor that replaces smartphones though. Google’s infamous AR glasses project, called Glass, raised questions about privacy because it could record video and take pictures. Snap-happy wearers taking part in beta testing – called the Explorer Programme – were branded "Glassholes", and the use of Glass was banned in certain establishments and public places. Google eventually cancelled the Explorer Programme and went back to the drawing board.

Höttges on Monday admitted that the success of AR glasses is not guaranteed. Nonetheless, he emphasised the importance for industry players like Deutsche Telekom to take risks and to explore new ideas.

In order to give Deutsche Telekom and Carl Zeiss a fighting chance, the AR glasses project will be opened up to third parties who will be encouraged to devise new use cases for them, he said.

"It doesn’t make sense that one company alone could make this ecosystem," he said.

Deutsche Telekom and Carl Zeiss do not have a timeframe for putting their AR glasses on sale because it is still in the early stages of development.

"It will be quite a long time before we can hold market-ready glasses in our hands," Simon said.

How to pave the way to 5G via modern OSS?