The milestone is two months ahead of the company’s previously stated ambition of the end of 2020 and comes at a time when it accelerates the roll-out of its gigabit-capable full fibre network across rural Kent and into neighbouring East Sussex.

In less than six months, Trooli has tripled the amount of cabling laid, from 200km in June to 680km at the start of November, while ramping up its build rate to pass more than 5,000 premises a month – up from 3,000 earlier this year – with that figure set to increase even further over the course of the winter.

The company has also grown substantially, with staff positions more than doubling from 57 in January to the current count of 116.

Andy Conibere, Chief Executive Officer for Trooli, said: “This has been a year of rapid growth and change for Trooli, and we have significantly expanded both our network and customer base as demand for our reliable, ultrafast, full fibre network continues to grow.

“Since January we have increased our number of homes passed from 10,500 to 50,000, raised an additional £5m in funding from NatWest, laid hundreds of kilometres of cabling and successfully crossed the county boundary to take our network to an underserved market in East Sussex.

“Over the same period we have continued to deliver an extremely high quality of service as reflected by a continued ‘excellent’ rating by our customers on Trustpilot.

“We are confident that demand for ultrafast broadband is only going to increase. It is rightly seen by the government as essential 21st century infrastructure and the experience of lockdown has accelerated demand from both business and private customers.”

Trooli, which was launched in 2018, is backed by €30m from the Connecting Europe Broadband Fund (CEBF) and a further £5m from NatWest. It is steadily building its network across Kent and East Sussex, and aims to be accessible to 150,000 homes and businesses in the next 18 months, rising to 500,000 in four years. 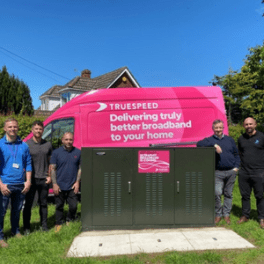