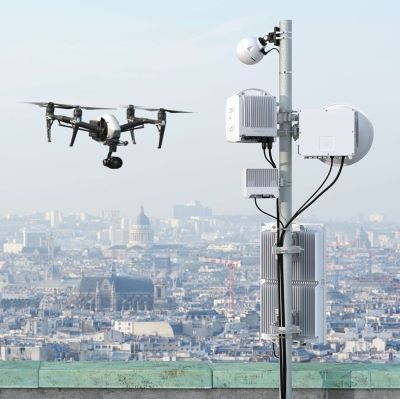 Earlier this year, Qualcomm celebrated a major technical milestone when their technology played a key role in the Ingenuity helicopter taking flight on the surface of Mars for the first time.

In a company blog post at the time, Qualcomm explained how they had overcome major challenges in helping the drone fly autonomously on the Red Planet, from reducing power consumption to operating a device around 390.89 million kilometres away.

“The main hurdle is operation itself; due to signals taking minutes to arrive, controlling a helicopter via remote control in real time is impossible,” they explained. “The helicopter must instead receive commands for autonomous operation transmitted from millions of miles away and delayed by 3–22 minutes.”

Ingenuity’s autonomous functionality was largely based on Qualcomm’s Flight Platform, the company’s first foray into commercial drone operation. Now, it seems that company will be taking their drone ambitions one step further, unveiling what they claim to be the world’s first drone platform and reference design to offer both 5G and AI functionalities.

The Flight RB5 5G Platform is intended to provide a baseline from which to develop commercial, enterprise, and industrial drones, helping enterprises to capture the data from drone cameras and process it effectively. According to Qualcomm, relevant use cases for the drones include film and entertainment, security and emergency response, delivery, defense, inspection, and mapping.

The Platform is powered by Qualcomm’s QRB5165 processor and builds on the company’s latest IoT offerings. AI and machine learning are central to the platform, serving to help prioritise data transfer over the network and enabling the drones to be fully autonomous.

“We are proud to continue our momentum of enabling the digital transformation of global industries by unveiling the Qualcomm Flight RB5 5G Platform, a solution that is purpose-built for drone development with enhanced autonomy and intelligence features, bringing premium connected flight capabilities to industrial, enterprise and commercial segments,” said Dev Singh, General Manager of autonomous robotics, drones and intelligent machines at Qualcomm.

Initial tests for the Flight RB5 5G Platform are being performed with Verizon using the company’s 5G network. If successful, the platform will ultimately be available to customers via Verizon’s Thingspace Marketplace. The drone reference design is already available for presale via ModalAI, with the development kit expected to be available in Q4 of this year.