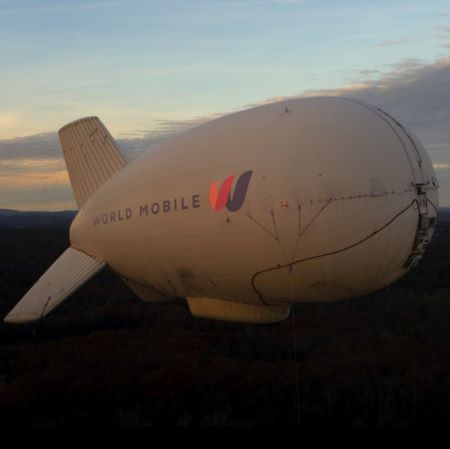 From deploying fibre underground to putting up mobile masts, deploying broadband infrastructure is expensive.
In recent years, we have seen a flurry of innovation attempting to make these deployments more cost effective and less time consuming, from Facebook’s Bombyx robot, that crawls along existing power cables and wraps them in lightweight fibre, to the HAPS Alliance, seeking to deliver broadband through a solar-powered unmanned air vehicle that glides overhead and beams down connectivity from above.
Now, World Mobile is set to launch (quite literally) their own novel broadband infrastructure solution in Zanzibar, Tanzania, in the form of balloon-based base stations.
The remotely controlled aerostat balloons are powered by solar panels and tethered to the ground, reaching a resting altitude significantly higher than traditional mobile masts, thereby improving broadband coverage to consumers.
The project is estimated to deliver connectivity to around one million people in Zanzibar by the end of 2023. World Mobile plans to have 20 Wi-Fi mesh sites deployed by January 2022, with 120 sites planned for the first half of next year, as well as the launch of the first balloon.
This initial deployment will, at launch, cover around 75% of Unguja Island (around 1,250 square kilometres) with broadband connectivity.
World Mobile notes that they already have agreements with the Zanzibarian government to provide connectivity to 300 schools, with the hopes that by making broadband more available will help shut shrink the region’s digital divide.
If the project proves a success, these balloon base stations could be rolled out more widely across Africa, with World Mobile already in discussions with the Tanzanian and Kenya governments regarding broader deployment.
"Mobile internet services are becoming quite popular in Zanzibar, like everywhere else around the globe. These services bring online access to information and communication to the masses through their mobile phones, helping bridge the existing rural and urban digital gap. More crucially, however, these services are singularly responsible for promoting financial inclusion by allowing the banked and underbanked in Zanzibar to participate fully in the emerging digital economy,” explained Said Seif Said, Director General of Zanzibar’s E-Government Agency.
Allowing people to access the digital economy will become ever more crucial in the coming years, not only for the personal development of citizens and their ability to engage with others around the world, but also financially. In December 2019, research from Oxford Economics suggested that financial identities for the world’s unbanked population could be worth as much as $250 billion to global GDP.