Geopolitics and Telco–TechCo transformation dominate the discussion around the latest 5G-aliser update, each having long-term implications for the future of 5G

Created in collaboration with STL Partners, the 5G-aliser began its life back in 2020, aiming to provide a useful graphic through which to measure the ebbs and flows of 5G development and the individual factors having the greatest impact on this process. Since then, the graphic has become a springboard for the discussion of key issues affecting the wider telecoms industry, with 5G the focal point.

In this instalment of the 5G-aliser, two topics stood out as having risen to prominence, not only in discussions of 5G itself but as part of a wider dialogue around the ever-evolving telecommunications industry: geopolitics and the telcos’ strategic shift towards becoming technology businesses.

Check out the video below for our live discussion surrounding these key topics.

Volatile geopolitics a driving change in the 5G ecosystem
With the increasing politicisation of the telecoms sector in recent years, particularly with regards to ongoing tensions between China and the US, geopolitics has long been an influential wildcard factor on the 5G-aliser. However, none of us could have predicted the Russian invasion of Ukraine and the enormous impact this would have on the global economy and telecoms supply chains.

With regards to 5G, the war has put Russia’s 5G development into a precarious position. One of the big talking points in the last few years with regards to geopolitics in telecoms has been the direct or indirect exclusion of Huawei from a number of Western markets, potentially turning the mobile equipment market into a duopoly between Ericsson and Nokia. This realisation has been a major part of the driving force behind the industry’s growing interest in Open RAN technology, which aims at creating a far more diverse, open vendor ecosystem.

Now, Russia could find itself becoming an interesting case study for just such a duopoly. With both Nokia and Ericsson pulling out of the market, Russia’s operators will be largely left with a choice of either Huawei or ZTE for their network equipment – and even Huawei has been reluctant to increase its activity within the country for fear of triggering additional sanctions from the US.

The situation has also demonstrated the growing importance satellite communications as a backup to terrestrial connectivity, with Elon Musk and SpaceX showcasing the value of their growing low Earth orbit constellation, Starlink, by donating terminals to the Ukrainian government.

How the growing impact of consumer satellite connectivity will impact 5G remains unclear.

From Telco to TechCo
Another key topic of discussion was the fundamental shift currently sweeping the telecoms community, namely the transformation from a traditional telco to a software and IT-focussed technology company and how this may affect 5G.

In many ways, this shift has been a long time coming. Telcos have long been envious of big tech players like Facebook and Amazon, whom they view as having benefitted inordinately from the use of their networks, capitalising on the agility and broad service offerings that their tech expertise allows them.

In fact, only last week the operator community was once again complaining about the perceived injustice of the situation, calling on regulators (via the European Telecommunications Network Operators’ Association [ETNO]) to force tech giants like Meta and Netflix to help subsidise their network costs.

“Some of that comes from a recognition that the telcos had had a real category error about their rivals – categorising the likes of Facebook and Google as ‘web companies’ when, in fact, they go all the way down to the silicon and all the way up to satellite. They are true tech companies, and it has left the telcos playing catch up,” explained Dean Bubley.

But attempting to shift into the tech and IT space is no small feat for a telco, with the operators largely lacking the in-house software and IT expertise to make a meaningful change, at least in the short term.

Of course, there are exceptions. This transition will be relatively easy for greenfield players starting from scratch, which will not be encumbered by decades-worth of legacy infrastructure and outdated organisational models; Rakuten is the posterchild here, though it must be remembered that they were a tech company that grew into a telco, not the other way around.

Likewise, large conglomerates also have an advantage in this shift due to being able to pull expertise from a number of adjacent tech businesses, such as semiconductors and cybersecurity companies in the case of someone like SK Telecom.

But what about for other telcos without clear technical expertise from which to draw?

This is not just a question of scale and resources – in some cases, smaller telcos, particularly in more advanced markets, can lead the way in terms of innovation – but it is nonetheless important to consider that some operators will not have the necessary skills to make this shift alone and will need to branch out to the wider ecosystem for help, whether through partnerships or M&A.

In many ways, this leads us to one of our key factors affecting 5G development from the 5G-aliser itself. As telcos transform their business models and try to adopt the agility inherent within technology companies, we will begin to see the emergence of new specialist 5G players, specifically targeting industry, municipalities, the public sector, and more.

The 5G-aliser: Key factors on the move
In recent months there have been many significant developments that continue to impact the development of 5G globally. Below are some of the key factors that we think are acting as a driving force for mobile technology on a global scale, warranting changes to the relevant dials on the 5G-aliser. 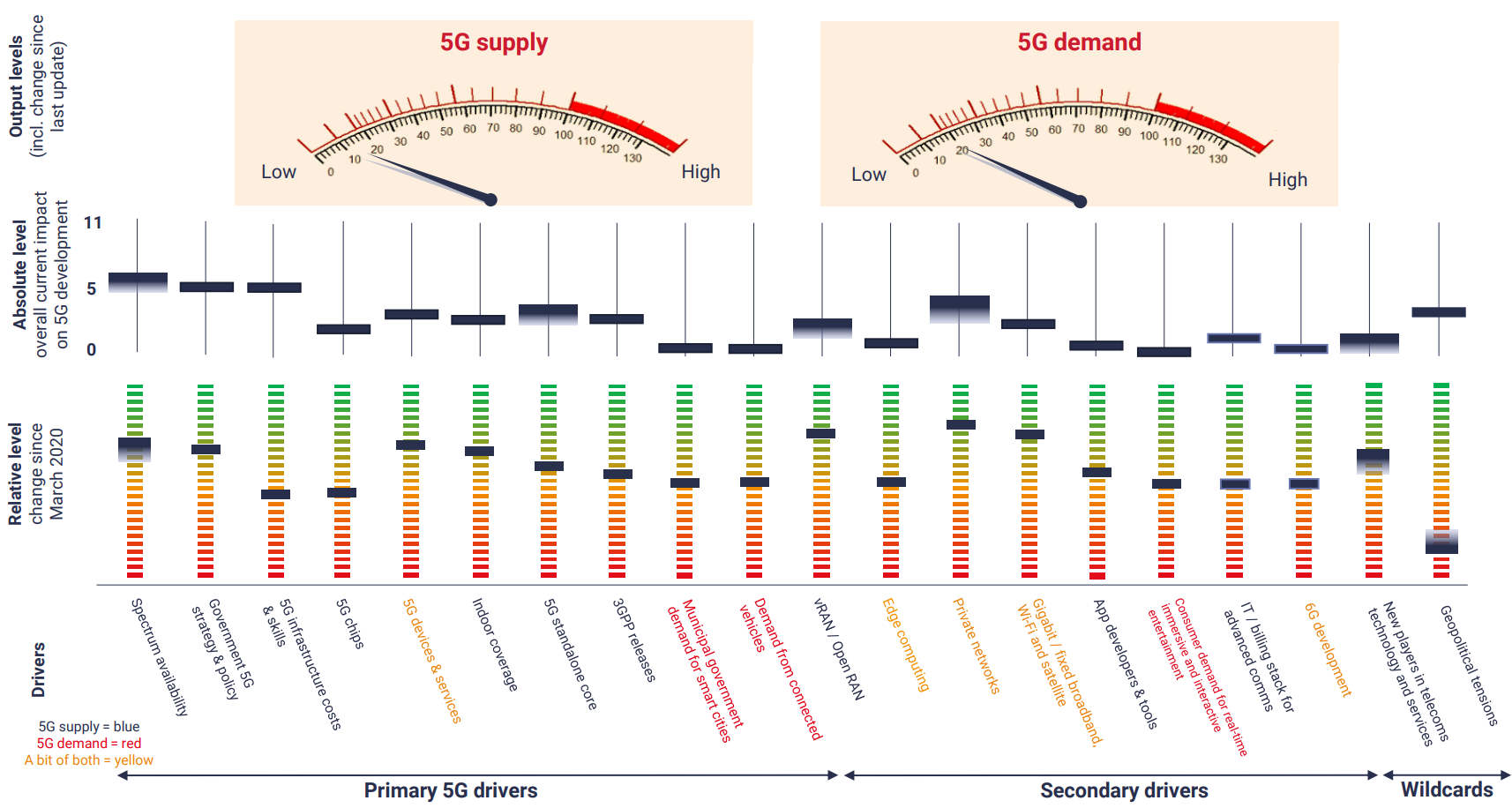 Spectrum increasingly available
When it comes to 5G spectrum, the more the merrier for telcos. In recent months, numerous countries have finally moved forwards with their 5G spectrum auctions after significant delay, including South Africa and Belgium, while France has recently allocated industrial 5G spectrum. Even India, who has found its 5G spectrum auction woefully postponed for almost two years due to the pandemic and clashes over pricing, is finally accelerating the process, with India’s telecoms minister even suggesting it could begin as early as June.

In some market, mmWave 5G spectrum is also beginning to become more widely available. Back in March, the US announced the conclusion of Auction 103, the third in a trio of spectrum auctions to offer mmWave spectrum to the US operators. In the UK too, Ofcom is preparing to make spectrum in the 26GHz and 40GHz bands available to the mobile players, launching a consultation on its proposal.

Taken together, this means that 5G services are finally beginning to be rolled out in additional countries globally, while operators in more developed 5G markets are getting more spectrum with which to bolster their services or potentially launch new ones entirely using mmWave spectrum.

5G Standalone
Until relatively recently, almost all 5G networks deployed around the world were operating on non-standalone architecture; i.e., using 5G access network over the top of a 4G core, reliant on support from 4G spectrum. While this allowed for significant boosts for customers in terms of low latency and data speeds, it could not deliver many of the more advanced use cases that 5G promised, such as extended reality (XR) applications and autonomous devices.

Now, however, the transition to standalone architecture is starting to gain pace. SA cores are beginning to supersede NSA cores in 2022, with 19 in progress or expected to be completed in 2022 or early 2023, and a total of 39 5G SA cores recorded in STL’s Telco cloud tracker. This transformation not only means a major boost for existing 5G services, but brings telcos closer to offering some of the most exciting use cases

Perhaps with the advent of SA 5G and the new use cases it enables, we will finally see the huge uptick in 5G demand that NSA 5G has so far failed to deliver.

vRAN/Open RAN
Virtualised (vRAN) and Open RAN continue to grow in popularity throughout the industry. Currently there are 33 deployments announced, although many trials are in progress and we expect this number to increase over next 12 months. Most deployments have been Open RAN but vRAN is emerging as a potentially competitive alternative. In theory it delivers the same benefits as Open RAN (i.e. multi-vendor openness) but without the overhead of integrating components from multiple vendors, and a ‘single neck to choke’ if things go wrong. 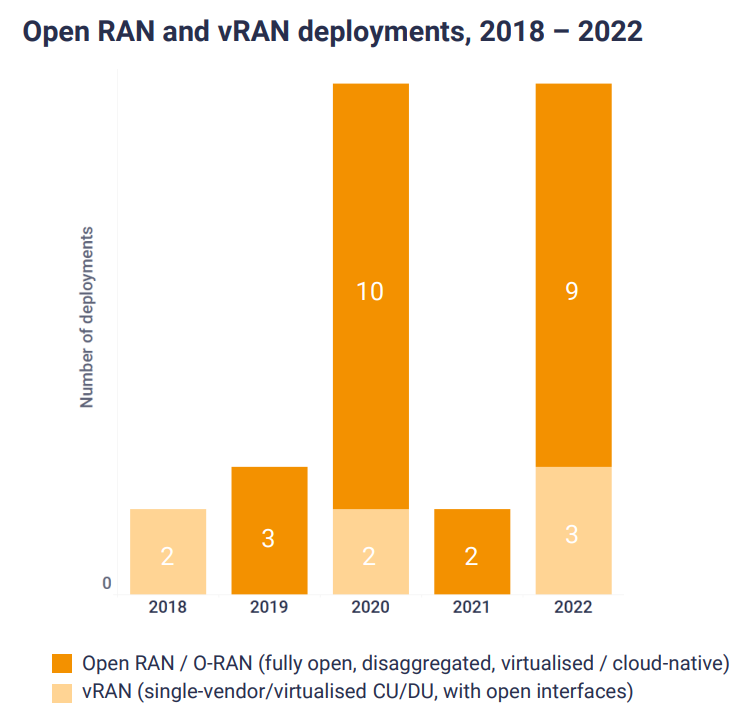 Momentum for these technologies is growing but it is still early days, with both governments and industry bodies still discussing how best to facilitate its evolution and wider adoption.

In the UK, for example, there has been an announcement of ‘joint ambition’ with the country’s operators aiming to have 35% of mobile traffic carried over Open RAN architecture by 2030 and recently releasing a set of Open RAN guidelines to help steer operators towards this aim.

Similarly, the Telecoms Infra Project (TIP) has recently announced the launch of the TIP Academy, an industry-led, operator and vendor neutral training service to help upskill the global telecoms community with regards to Open RAN.

New players to the fore
The players involved in this sector are evolving. Traditionally we have seen a landscape of many operators that all function very similarly, regardless of their scale – including cloud companies, tower operators, municipal operators, industrial operators and fixed wireless operators.

The new ecosystem is made up of many different types of telcos, that operate very differently from one another. Many are new players in the telecoms space including municipal governments and industrial players building their own networks who are increasingly active in this space.

A changing environment but little shift in supply and demand
To conclude, the latest update to the 5G-aliser reflects a world in which 5G is gradually becoming not only more ubiquitous, but more powerful, with additional spectrum becoming available and SA architecture beginning to be rolled out.

However, at the highest level, the shifts of the last six months have only delivered 1-2% bumps in overall supply and demand, with the industry yet to see the soaring uptake of 5G services in the consumer and enterprise segments that the new technology has promised for many years.

These themes will be explored in more detail at Total Telecom Congress in London on the 1-2 November 2022. To find out more CLICK HERE 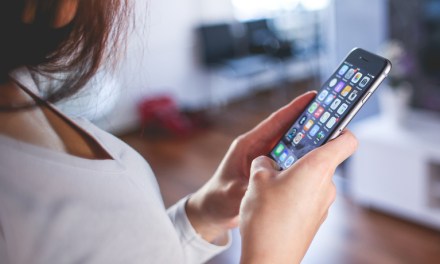